Over the last half century I have heard many wonderful stories about VALOMILKS from our fans (fanatics?). Here are some of their stories:

Just when I thought I had heard every way of eating a VALOMILK this came in from Susan and George of Lynchburg, Ohio. Susan wrote: “When my husband and I stopped at one of our favorite restaurants, Cracker Barrel, we saw VALOMILKS in the candy section! We took a walk back in time to our childhoods and recalled many memories centered around VALOMILKS: saving our allowances to buy this once a week treat, our old neighorhood, our old playmates and even our old schools where we often bought VALOMILKS.”

“I remember taking very small bites of VALOMILKS and letting each slowly melt in my mouth. In order to make the VALOMILKS last longer I would eat only half of the cup, although sometimes I would sneak into the second half of the cup just to savor one more bite. [VALOMLIKS came one cup per package then] I would then put the half-cup back into the wrapper which I had carefully opened and saved. After doing this I would set the half eaten cup in its wrapper on its edge between two non-intrusive supports to save the delicious filling and thus secure my treat for later in the day. It never was saved for long though, a couple hours would be an exaggeration. Then I would return to my VALOMILK and enjoy the second half, licking the wrapper before tossing it away.”

Around 1958 my grandfather started a very popular promotion based on Hawaii and Alaska being admitted to the Union. The promotion ran until the mid 60s. We put cardboard disks the size of milk bottle caps on each VALOMILK. The disks had the names of all 50 state capitols. You would save up 30 disks, mail them in to our factory and receive 10 free VALOMILKS in a cardboard tube. I used to work on Saturdays counting those disks and putting address labels on the tubes. I was paid $1.00 for the day, which seemed like a lot of money then. I started collecting the disks from those sent in and from ones I found out in the factory. Even with this advantage, I never did collect all 50. People have sent me many disks in the last few years, and I have found some in boxes from our old factory, but I still only have 29 states. I have often wondered if we ever made all 50 states! From time to time VALOMILK State Capitol Disks even make it onto e-Bay.

Many people have written us about the VALOMILK State Capitol Disks. One, whose name I will not mention in order to protect the guilty, told how she saved up her disks and just when she got to 30, they disappeared. To this day she blames her brother!

Eddie wrote us saying he credits his saving and trading VALOMILK Disks to his memorizing all fifty states and their capitols in his geography class in the seventh grade.

Daniel tells his scout troop how his passion was collecting the disks for free VALOMILKS in grade school … until he discovered girls!

John wrote about amassing a collection of disks that would give him a lifetime supply of free VALOMILKS until his mom cleaned out his room one day. He said he would have rather she pitched his baseball cards! 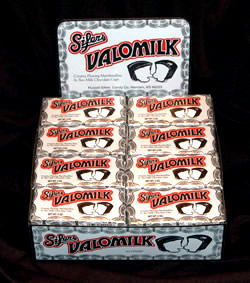 A few years back I received a call from a frantic young man named Michael. His girlfriend, Christie, absolutely loved VALOMILKS. Not only were they her most favorite candy, but she also loved VALOMILKS as a gift above almost anything else because they are so hard to find, and thus they are special.

Well, Michael was going to propose marriage to Christie and he wanted it to be something special. He was going to take her to the finest restaurant in town and after dinner, present the engagement ring and his proposal to her. But Michael wanted to have a little fun too. He wanted to put the ring inside a box of VALOMILKS as an extra surprise and then have the box delivered under a domed dish by the headwaiter.

Problem! Michael could not find an entire box of VALOMILKS anywhere, and thus the reason for his frantic call. We immediately got a full box to him. Michael took one package out of the box, put the engagement ring in the jewelry box and placed it carefully in the VALOMILK box. He then took the VALOMILK box to the restaurant that afternoon and explained to the manager what he wanted them to do at the end of their dinner.

That night they both dressed up to go to the restaurant. Michael said they did not talk much during the dinner but Christie kept looking at him with waiting eyes. After dinner they ordered dessert and the headwaiter brought the domed dish to the table. Christie watched with expectant eyes as the headwaiter slowly lifted the dome and then she saw the box of VALOMILKS. She let out a scream of excitement that drew everyone’s attention as she opened the box. And there inside the jewelry box was the engagement ring. Before Michael could say one word, Christie quickly put it on her left ring finger just to make sure it fit. She then turned to him and said, “Oh Michael, my favorite candy!”

A week later, Michael wrote me to tell me the story. And yes, Christie did say yes to Michael’s proposal, but only after enjoying her VALOMILK desert.

Here is another romantic VALOMILK story. It comes from Don and I will tell it in his own words.

“Thank you for making my favorite candy again. When I was in junior high school, there was a small neighborhood grocery store across from the school. There was also a young girl in my class named Mary Jane and I had a crush on her. Often Mary Jane had to have a VALOMILK Cup before school, probably because she hadn’t taken time to eat breakfast. Never the less, Mary Jane always had a nickel in her purse (yes, VALOMILKS were once a nickel) and always asked me to run across the street before school and get her “chocolate transfusion.” I always complied and Mary Jane thought I was the nicest boy in her class.”

“Back then, VALOMILK had a punch board where when you purchased a VALOMILK you got to punch out a small cardboard button. Inside you could win one or more free VALOMILK Cups. Well, I soon found out that punching the button three down and three across would often reward me with three or four FREE VALOMILK Cups!”

“Mary Jane was the nicest and prettiest girl in my class. I really had a crush on her, and she thought I was the nicest boy to get the VALOMILKS Cups for her. This is how I came to love your candy. I never told Mary Jane about often winning free VALOMILK Cups; it was my secret, just like my affection for her. I did this for two years in junior high school. The following fall, when we moved up to high school, I raced to school early the first day to await Mary Jane’s request. She never showed up. I found out a few days later that her family moved out of town over the summer. I was crushed!” “Would you believe that fifty-five years later, I think of her every time I see a VALOMILK.”

PS if you have a VALOMILK story to share on our web site, please send it to us (Contact Us), and if we use it, we will send you a factory fresh box of 24 VALOMILKS and credit your name (if you wish) on our web site.